How to Make Naan 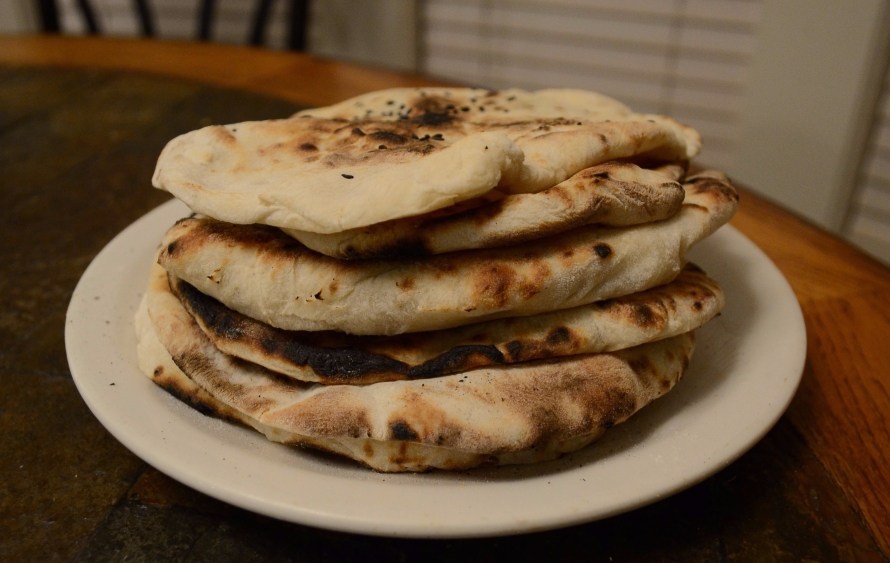 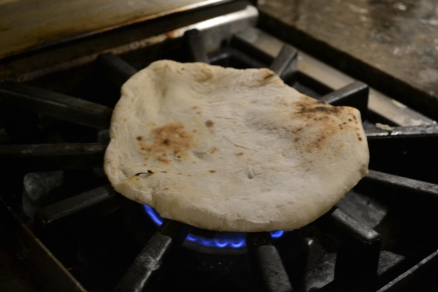 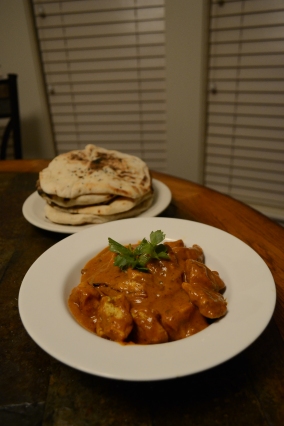 When I first ate naan, there was an immediate connection between me and the Indian leavened bread. What makes naan so delectable is that it is similar to pita bread, but it has a higher fat content, making it more moist. Because of my obsession with naan, I proceeded to make it at home. My first attempt was quite disastrous. The naan did not rise a lot (I think my water may have been too hot so I killed the yeast), and I had accidentally used rice flour instead of all-purpose flour. What came out was an edible, flattened, soggy pancake, but it didn’t have the fluffy and puffed up texture that naan is supposed to have. To redeem myself, I came up with another recipe and I made sure to use all- purpose flour and lukewarm water to activate the yeast. I was ecstatic because this naan had such great texture, and do I dare say it: It was better than the restaurant’s! GASPP. yes, I said it. It is so gooood. The naan is incredibly delicious by itself but even better with chicken tikka masala. I have not yet made chicken tikka masala; this time I bought a store made sauce and added chunks of chicken, but I am destined to make it one day.

The process of making the naan sounds very odd but this is the way to create huge bubbles and texture in the naan. Anyways, Happy cooking and enjoy the naan!

Attention all matcha lovers, enjoy the holidays with some sweet and bright matcha cream puffs that pair well with tea or coffee. These also make great holiday gifts if you haven’t bought something yet for your friends and family! Used @matcha_maiden to make the cream filling and the matcha chocolate shell on top. Here is the recipe: For the puff: 2/3 c. water 1/3 c. unsalted butter 1/2 tsp. salt 1 c. cake flour 4 eggs For the cream filling: 1 c. heavy cream 4 T sugar 1-2 tsp. matcha powder (used @matcha_maiden) For the chocolate shell: 2 oz. white chocolate 1 T coconut oil 1 tsp. matcha powder The full instructions are in my bio link!💕
A colorful vegan bowl for you all! I've been loving Halal street food like Halal Guys and other chains. Their falafels are to die for and I have always wanted to make them at home with a baked version instead of a fried version just so I could cut back on consumption of some oils because it doesn't hurt to decrease oil consumption! I whipped up a baked falafel that I think is quite tasty and satisfies all my falafel cravings. I baked these but I think they would crisp up really well in an air fryer as well if you had one!  Please feel free to customize your bowl in another way but adding your own toppings. I added onions, chickpeas, and sweet potatoes but you may consider adding a cucumber salad, baba ghanoush, hummus, roasted vegetables, and so much more! Here is the recipe: For falafel: 1 1/2 c. cooked chickpeas, washed and drained 1/4 c. chopped red onion 1 tsp. garlic powder 1/2 c. parsley 1 tsp. salt 1/2 lemon juiced 2 T olive oil 2 T oat flour Full recipe for the turmeric rice, tahini dressing, and white sauce can be found in link in bio💕
Creamy! Rich! Dark chocolate bars that are vegan and gluten-free are coming your way! There are a few ingredient swaps in this recipe that make it different from your typical chocolate pie and some "odd" yet game-changing ingredients are used like tofu and thick yogurt. Tofu sounds odd but it adds protein to this dish and does not have much flavor anyway so all the chocolate that goes into these bars mask up any tofu flavor. Here is the recipe: For crust :  3/4 c. pecans 3/4 c. rolled Oats 1 T ground flax + 3 T water 2 T liquid sweetener like maple syrup or honey (if not vegan)  For filling:  1 1/2 cups vegan Greek yogurt (Use plain whole fat Greek yogurt if not vegan) 1/2 cup firm tofu (I used Whole Foods  brand) pinch of salt 2 tsp. vanilla extract 2 tsp. tapioca starch (cornstarch works as well) 1/4 cup liquid sweetener like maple syrup or honey (if not vegan) 1/2 cup melted dark chocolate chips Full recipe instructions in my bio💕
Here is a fun and festive recipe that is a healthy alternative to cake donuts: Purple Sweet potato baked donuts that are better-for-you since the sweet potato replaces most of the sugar and oil. I topped the donuts off with a sweet potato glaze and shredded coconut. Here is the recipe: For donuts: 3/4 c. whole wheat flour or all-purpose flour* 1 tsp. baking powder 1/2 tsp. cinnamon 1/8-1/4 tsp. ground ginger pinch of salt 2-3 tbsp. liquid sweetener (I used honey) 2 tbsp. milk (any type of milk works) 1-2 tbsp coconut oil* 1/2 c. mashed ube 1 egg 1 tsp. vanilla extract Full recipe instructions are in bio link💕
A 4-ingredient chocolate protein bite that is no-bake, vegan, gluten-free, and refined sugar free? Count me in! For the past couple years, quick food processor snacks have been my favorite things to make because of easy clean up. Making snacks at home also beats store-bought grocery snacks because you know what you are putting into the snack! Here is the recipe: 1 1/2 c. raw walnuts 1/2 c. cocoa powder 1 c. dates soaked in hot water (I used deglet noor dates) 1/8 c. toasted and unsalted pumpkin seeds. Full recipe instructions in in my bio💕
If you want to make something in between a cake and pudding texture, you must make this Cherry Clafoutis which has a unique texture that is the best of both worlds! Slightly crunchy on the top but soft and pudding/like in the middle. This dessert is difficult to resist especially since cherries are the star of this dish. Here is the recipe: 1 c. cherries, pitted and halved 1/2 c. milk (any fat percentage will work) 2 eggs 1 tsp. vanilla extract 1/2 tsp. caramel extract (optional) 1 tbsp. melted butter 2 tbsp. slivered almonds 1/4 c. granulated sugar 2 tbsp. brown sugar pinch of salt 1/4 c. AP flour 1 tsp. lemon zest 1/2 tsp. baking powder powdered sugar for dusting Full recipe and instructions are in the link in bio! Happy baking💕
Advertisements