On this day, I was handed over to my other cousin, Billy, for a weekends’ worth of excitement. The motive of me being “handed over” was so that I could reunite with every single Taiwanese cousin while they took me on memorable road trips to their favorite destinations that embodies what they love about their country.

Billy drove from Bali (in Taiwan, not Indonesia) to pick me up from Kevin’s urban apartment, and when his aging, maroon Honda pulled up I enthusiastically greeted him and dumped my luggage in the trunk. Unlike Kevin, he didn’t ask me where I wanted to go- he knew immediately where to take me, and soon we were on our way to Beitou Hot Springs. The Beitou area consists of natural hot springs that continually emits steam, and some are open to people while others reach temperatures of 100 °C and are off-limits. We first visited the Hot Springs Museum which was an original bathhouse built long ago by the Japanese in European style so the inside had Victorian columns and baths but tatami rooms as well. Because the Japanese are extremely orderly and clean, we had to remove our shoes in the museum and put on slippers to keep the interior spotless.

A tatami in the museum

We then headed out towards the Geothermal Valley, also dubbed “Hell’s Valley”, a bright emerald-colored body of water that is 90 °C, so very little life sustains in the water. The weather was already hot enough, but once near the edge of the Valley, the sweltering heat reached my skin and I began to sweat all over, especially on my neck where my long hair dangled freely. I felt audacious standing so near, knowing that a slight mishap could result in my death, but the uncanny Valley was quite mystical as subtle clouds of opaque steam arose and idled marginally above the still, emerald water. We wandered past other hot springs in the human-tolerable range, but all were rather empty because who would be in their right mind to step in a hot springs in tropical, Taiwanese, Summer weather?

It was around noon when Billy told me of a fantastic “restaurant” that specializes in  braised pork rice (lu rou fan) and I was so down because braised pork rice is the perfect combination of carbs, fat, and salt, and I never turn down a braised pork rice offer. There was one minor issue with which he wasn’t exactly sure where and what the place was called, so we scoured around the Beitou area, driving through random roads as he tried to recall of the place in his head. We then arrived at a random, dingy and dilapidated building with a variety of food stands, clothing stores, and medicine shops on the inside. The interior had little electricity (and certainly no A/C), and was mostly lit up by windows on the walls and ceilings for sunlight to enter. Peculiarly, the place was congested with people mostly eating lunch or buying fresh fruits, meats, or seafood from the tiny vendors scattered across each floor. On a side note, the scene was chaotic, unsanitary, and dismal, but a scene like this is very typical of Taiwan so it didn’t bother me for I was accustomed to it. Billy and I sauntered around each floor, past multiple butchers, scanning from corner to corner to find The “restaurant”, but his frustrated complexion indicated that it was nowhere nearby. Eventually, he gave up and we sat down at another braised pork rice restaurant which he described as “not as good”. He wandered off to see what people were eating, when he ran back exuberantly and yelled “I found it!!” I stood up so abruptly that I experienced a minor whiplash, but proceeded on to follow Billy, who was now very much ahead of me.

The restaurant (a food stand really), called 矮仔財滷肉飯  was in a relatively depressing corner, however the food stand was not depressing at all. The chefs frantically sauteed and washed dishes as a line of forty something people waiting to order watched and an additional forty something people sat eating. I headed to the back of the line, which spiraled down a staircase where the food stand unfortunately was no longer in sight. Thirty five minutes had passed until we got to the front of the line, where Billy ordered several dishes but sadly had to switch a few orders since many of their dishes were sold out. But no worries because whatever we ordered turned out to be SOME OF THE BEST FOOD I HAVE EVER PUT IN MY MOUTH. I seriously don’t even know how to explain how scrumptious the food was, like does a 1000/10 tell you how tasty the food was? or the term “better than sex?” (whatttt) Yes, it was THAT amazing. 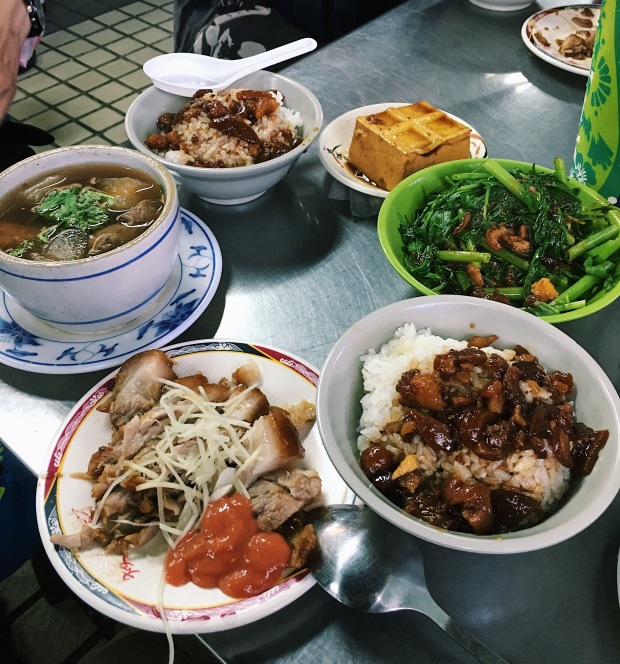 We ordered two bowls of braised pork rice which on top of the meat, the chef had additionally included ample amounts of gelatinous skin and fat, and I think that was the wow factor of the dish. I’ve had hundreds of braised pork rice bowls in my life and I’ve never tasted a memorable one until this one. We also got 2.) a tofu chunk braised in the pork juices, so if the tofu is tasting like the braised pork, it’s got to be great, 3.) kongxincai (water spinach), sauteed and drenched in the pork marinade with meat chunks (Oh my lord so good), 4.) pork and winter melon soup (perhaps the best soup I’ve ever had. It was meaty but not oily at all- how do you do that?), and 5.) fatty pork slices with red sauce. The rice, tofu, and water spinach dishes all had the braised pork sauce, but they all had their own distinct flavors, which stumps me. And the soup, oh my, do not even get me started on the soup; it tasted nothing like the braised pork sauce, it had a special flavor that I cannot fathom either. As a food fanatic, I believe that a restaurant’s food is good when you can’t decipher what the ingredients are because you can’t imitate it at home. Thus, you’ll keep coming back to the restaurant to eat it. I now know that in the future anytime I visit Taiwan, I will ask to come back here to eat. I encourage you all to put this restaurant “矮仔財滷肉飯” on your bucket list!!

These naturally-colored squid ink bread rolls are stuffed with melty cheese and topped with a crispy garlic topping! I know squid ink sounds odd, but I used it for food coloring only; it doesn’t add flavor so don’t worry about the bread rolls tasting fishy! The rolls taste like a cheesy garlic bread and the garlic butter topping is slightly sweet... it’s so so good!!! Garlic butter is usually just salty, but this one is slightly sweet, similar to how some Asian bakeries make their garlic butter. This recipe is simple and I hope you give it a try!
Happy St. Patrick’s day! 🍀 I felt it was appropriate to make something green so of course matcha was my go to food coloring. This is a white chocolate matcha cake that has pound cake- like texture and tastes like a green tea Kit Kat. I found a doily template online and cut out the pattern using an exacto knife and created the pattern on top with the stencil and matcha. It looks quite elegant and complicated but is extremely simple to do. The cake is slightly sweet and tastes so so good with coffee. I use @senchanaturals matcha which I found at Costco!
Last week was incredibly hectic, so I coped with the stress by kneading dough and shaping these purple sweet potato steamed buns (also called mantou)! Working with dough is just so therapeutic😌. These steamed buns are SO simple to make and they require only 5 ingredients: all-purpose flour, milk, yeast, sugar, and purple sweet potatoes. There are 3 common types of purple sweet potatoes: Okinawa, stokes, and Charleston, and all 3 types work for this recipe. I used Charleston potatoes this time to yield a richer purple color.
If you are wanting to make some Valentine’s-themed desserts, you might just want to try these blackout mochi brownies with raspberry filling! These gluten and oil-free brownies stuffed with homemade raspberry chocolate take brownies to the next level and I’m obsessed with how they’re slightly chewy. The brownies also aren’t too sweet and the raspberry chocolate adds a nice tang that complements the brownies well. I used black cocoa powder (like the kind used in Oreos) for both color and flavor. It yields a less dense chocolate flavor than the brown kind and the black contrasts the pink chocolate well. I made my own raspberry chocolate with @foodtolive raspberry powder and white chocolate, although you could also use ruby chocolate if you have some.
Made a matcha green tea and strawberry cake because it gives holiday vibes and I’m still in holiday mode 😓! The sponge cake is made with a low-fat batter, similar to genoise and the cream is flavored with @nature.restore strawberry powder resulting in a cake that tastes quite light. I use matcha powder, but you may use regular green tea powder which would result in a more yellow-green color rather than a vibrant green. Both versions would taste great! The cake is not too sweet and goes perfectly with coffee or tea.
Happy New year! I am kicking off this year with my first recipe: steamed pork and cabbage dumplings stuffed in a bicolored wrapper! The orange dough is made using gochugaru (Korean chili powder) which creates a lovely deep color. Homemade dumplings are really worth the effort and can be frozen for several months.
Advertisements